Read below about the local Carpenter who was also the coffin-maker and undertaker; where the builders bought their bricks; and one well-known family of builders....

From School Log Book, 1906:
Sept. 17th William Lake's name removed from the register as he has left in order to become a carpenter. His age was 14 on July 2nd.

The Lake family lived in the house now called 'Carpenters' - far right of photo above.

'Along the side of the Common lived the Lake brothers, carpenters and undertakers. When delivering a coffin, they would rush it through the village on a two-wheeled barrow. Country people were 'laid' in the parlour in their own homes and were either carried by bearers or made their last journey on a horse-drawn cart. When a funeral took place, curtains along the route were drawn tight and those who saw the cortege stood facing, men bare-headed.' (Quote from Tony Kent) 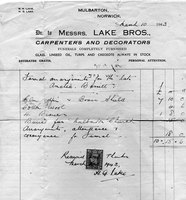 Census returns for Mulbarton from Victorian times list several 'bricklayer's labourers' among the occupations - such as Brough Hemnall in the 1891 census who lived in one of the Church Cottages. 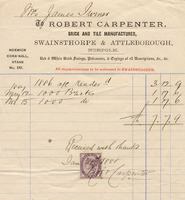 Bricks were once made just over the boundary in Swainsthorpe - east of the railway line in Brick Kiln Lane (bill heading of 1886 left). Many men have been involved in the building trade over the centuries, but the 20th century housing boom enabled new firms to rise and prosper.

If anyone has more information about the brickworks we'd love to hear!

In the 1908 Kelly's Directory, Alfred Banham is listed as Builder

The name 'Mickleburgh' has been closely associated with building in Mulbarton....

In the early 1950s, Rex Mickleburgh formed a partnership with his father Bob, brother Chris, and his father's colleague Ray Rutland to form Mickleburgh & Rutland Ltd. Their first store was the old thatched cottages by the church. 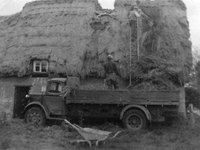 When they had to demolish these in 1957-58 (above) they moved to the Rectory Barn in Rectory Lane until they were able to acquire land behind the old school and clear the pigsties to build ware-houses and a builder's yard. The company now included younger brothers, Dennis, Bryant and Peter Mickleburgh, with sister Jennifer as administrator. They moved from small-scale building jobs to contracts with local District Council, among them a contract to build all the houses on the south side of Cuckoofield Lane in the early 1960s. 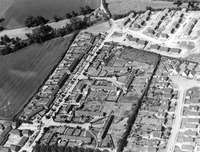 Micleburghs built the line of houses on the far left

As fields were sold for building, so Mickleburgh & Rutland moved into speculative development, building Rosary Close, Forge Orchards, Tudor Way, Brindle Drive, and some housing on Long Lane and on the east side of the Common. But most of the 1970s housing estates were large-scale and more expensive to develop and went to far bigger companies. The Mickleburgh brothers went their separate ways, concentrating on smaller-scale work that needed the personal touch.