ON THIS PAGE is information on the World's End; memories; some organisations that met there; a list of Landlords and breweries

Situated on the Norwich Road (B1113) just to the north of Mulbarton Common, the present World's End probably dates from the 17th Century with later additions, although the stable block (see photo below) was demolished to enlarge the car park. Besides being a fully licensed inn, it was used for auction sales (e.g. of 'Carpenters' and other the houses west of the Common in 1873) and for petty sessions during the 19th century. It was obviously a thriving country inn:

The bowling green seems to have been extended, or incorporated, into a much larger 'Pleasure Ground' during the days of William Todd, in the 1880s and '90s.

Bowling green at the back of the World's End - action shot c.1910

The Brewery Outing to our Village Mulbarton c.1890

....Every summer - and bless me if I remember a rainy day - along came the Brewer's men, their wives and their children. They came from the town to our village, the horses would be dressed up with plumes and ribbons, and al the people in their Sunday best.... As soon as the cavalcade arrived, the horses would be taken to the stables, and the people would all make for the pub. They'd have dinner there, and boy what a dinner! And speechifying of course. Then on to the Common for Sports. My! Didn't I love the barrel-rolling.... Those men who were going in for the race would gather at a certain place, then at the word 'Go' they'd roll those barrels at a spanking pace - just using one hand to keep the thing a-rolling.... When it began to grow dark, the horses would be harnessed to the drays, and off they'd go at a fine trot, the women holding torches aloft. Many's the time I've followed them most of the way back to the town.
(Extract from 'Within Living Memory - a collection of Norfolk Reminiscences' (written and compiled by members of the Norfolk Federation of WIs, 1971) All anonymous.)

The presence of another pub - a 'beer house' in fact - at the south end of the village seems to have been no threat, and for a time there were family links:

'In 1907 my Grandfather and Grandmother, 4 sons and a daughter, moved to the World's End. His name was Harry H. Carver. His daughter later kept the Tradesman's Arms for over 30 years - Frank and Blanche Swain.'  Nesda Gray (nee Carver) 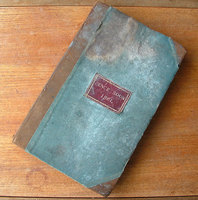 Odd Fellows calendar for 1877. Meetings appear to be fortnightly on a Saturday, with two compulsory meetings a year 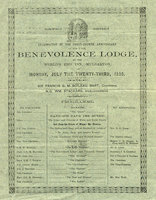 Balance sheet for year to 31 Dec 1935, indicates that the Lodge was established 3rd Feb. 1844 and met at the World’s End

Numerous clubs met or held functions in the World's End, including a bowls club, the Oddfellows (above), and (after World War 1) the British Legion. No-one quite knows who the Mulbarton Knuts were (below), what they did or how long they lasted!  Clubs that met in the nearby Parish Hall, such as the Men's Social Club and the Boxing Club also had close links with the pub.

Mr. Bailey (brought up in Church Cottages ) remembers his grandfather and Uncle Lee going to the World's End regularly. "Sometimes I slipped in and sat on the old settle and played the concertina."

Both pubs were popular with GIs from the nearby USAAF base at Hethel, who could easily walk or cycle here. 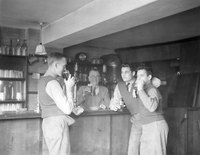 Another villager comments, 'At the top of the Common stood the World's End - somewhat higher class and not so welcoming [as the Tradesman's Arms]. This was kept by Mr. Swift and his son. There were rooms that were hired for meetings and a large Club Room where a boxing club run by Lenny Dack had its home and gave good shows.' 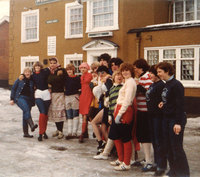 Licensees of the World's End

1776 - 81 William Larter - when offered for sale by auction, to be held at the WHITE SWAN, St. Peter Mancroft, Norwich, as advertised in the Norfolk Chronicle 7th September 1776

1907 - 1912 Henry (Harry?) Hewitt Carver - came from Bramerton Woods End
(Grandfather of Nesda Gray (nee Carver), came with his wife, four sons and a daughter. One daughter married Frank Swain, who became licensee of Tradesman's Arms, Mulbarton. By 1916 he is listed as a 'Farmer')

1929 - 1930 Victor Watson = Lord Holmes of Court. Allegedly evicted by the Brewery due to his continual late hours serving and non-payment of taxes.

From Parish Council Minutes: 23.01.34 'No objection raised to the transfer of the licence of the World's End Inn' 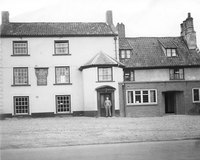 William Swift, Landlord, in the doorway after the new extension had been opened just before WW2

From Parish Council Minutes: 14.3.57 'Clerk.. received a letter [about] a change of tenant at the Worlds End.'

Part of the Anglian Host Group from 1983: 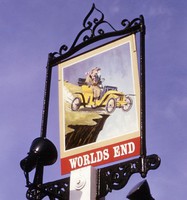 1975 interpretation of the name

Breweries at the World's End 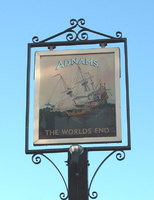 2005 interpretation of the name