More on World War I

The Great War - the Home Front

Events were organised to support the war effort. We know from a letter sent on behalf of King George V to Mr. W A Emms of Birchfield Lane (dated 7th Oct. 1914 - below) that a donation of £5.10s.0d was sent to the National Relief Fund from Mulbarton & Swardestone (sic) Brass Band. However, a Parish Council minute of 5th October 1914 shows that the Council declined to make a contribution! Soon afterwards, the same Brass Band letter under W.A. Emms, sent a donation of £3.3s.0d to the Commission for Relief in Belgium. 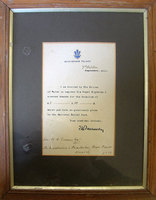 With so many men going off to war - especially after National Service came in - women and children had to take on more work:

'To compensate for the lack of labour, East Anglian farmers, through the County Education Committees which they controlled, brought in boy labour. School exemption certificates were issued for farmers who could give work to lads over twelve*, and in January 1916 this was extended to girls who could look after younger children to enable their mothers to work. Although there had been a tradition of child labour in peak periods of the farming year, this deprivation of education for a whole generation was surely one of the shameful episodes of the war on the home front.'
* Normal school-leaving age was on reaching 14 years of age.
(From Nicholas Mansfield, 'Land and Labour' in Gerald Gliddon (ed) (1988) Norfolk & Suffolk in the Great War, (Norwich, Gliddon Books) p.75)

This is the background to some entries in the Mulbarton School Log Book:

There is no other mention of the War in the School Log Book - the War began during a Measles epidemic and ended with the school closed for a few weeks for an influenza epidemic. Armistice Day was marked annually in school after the War.

Inside of a Red Cross card

From the East Carleton Parish Magazines, written by Rev Charles B P Ramsay:

SEPTEMBER 1915
The Mulbarton Squad of the Volunteer Training Corps had their first Church Parade at East Carlton on Sunday Sept. 5th. About 20 were present under the command of Squadron Commander R W Tuddenham and Sergeant West. The Squad marched to and fro' Headquarters accompanied by the Mulbarton and Swardeston Band.

JANUARY 1916:
The Mulbarton and District Platoon of the C Company, 7th Battalion Norfolk Volunteer Regiment has not been able, for various reasons, to do much drill since harvest.

The new landlord of the World's End has put his Club Room at our disposal, and the platoon hopes to resume regular drill at once.

Platoon Commander Ramsay has summoned a parade on Monday, Jan. 3rd, at 8 pm, at the above Headquarters, and hopes for a full attendance in order that he may get the enrolment papers in order so that members can receive the Government brassard to wear.

Dummy wooden rifles have been ordered for drill purposes, and we hope to put the members into uniform shortly.

Outside their HQ - the World's End - with uniforms

We shall be glad of recruits to come to the parade. Recruits required are of four classes:

In two directions the 7th Battalion is doing duty, and a detachment under Sergt. West will do Government work on Jan. 2nd.

The movement is an important one, and, we believe, has come to stay.

The platoon has an excellent and able sergeant in Sergt. West.

(and at the end of the page):
N.B. - On and after Jan. 10th no lights must be shown outside houses half an hour after sunset or before sunrise. This is the latest Government order for Norfolk and Suffolk.

MARCH 1916
The Mulbarton and District Platoon had church parades at Hethersett and Bracon Ash. The Platoon has more men in uniform and is fast becoming efficient. It has done a great deal of important and useful work lately and recruits are still coming in. Volunteers are now recognised under the Volunteer Act of 1863 by which they become an integral part of Home Defence Troops. If mobilised, they would receive the same pay and allowances as their brothers in the regular forces.

MAY 1918
As so many members of the Rifle Club are serving in the Army the Rifle Club will have no meetings this year. Lord Linley is kindly permitting the 11th Platoon Volunteers to use the Range for rifle practices.

When the war ended the 'heroes' returned to a 'flu epidemic and a very uncertain future....

In a local newspaper cutting dated Nov. 11th 1931, the Mulbarton and District branch of the British Legion is described as 'recently formed'. The report describes

'...a large congregation at Mulbarton Parish Church for the special service on Armistice Day. Members of the British Legion attended under Mr. T. Pearce (Warrant Officer, Conductor Indian Ordnance Department) and the president of the branch, Lieut-Col. R. Boileau was also present....'

It then reports that the British Legion marched from Mulbarton to the East Carleton war memorial and then to East Carleton Church for their first Church Parade.

'A special service was held at the Mulbarton parish church on Sunday afternoon, for the purpose of dedicating the new banner of the Mulbarton and District Branch of the British Legion. The branch, which was only formed last year, is rapidly gaining strength. The company....headed by the Wymondham British Legion Band, marched to the church.... At the head of the local branch were: Colonel Boileau, President; Mr. T. Pearce, Secretary...

On leaving the church the Legion, headed by the band, paraded round the Common and back to the Headquarters, the World's End Hotel....

It obviously became an active branch:

A report of March 2nd 1934:
The Mulbarton branch of the British Legion entertained some 50 of the wives and children of members at the World's End Clubroom on Friday. After a tea the company were entertained and amused by a sketch.... Games were organised....

By this time there were fears that another war would start....