The farm house facing Norwich Road - 'the Turnpike' - is marked on the 1724 map of Mulbarton. The house and farm are closely associated with the Turner family, whose family line is recorded on two memorials in Mulbarton Church. The family tree has been traced in great detail in a book about the family, but it is not always easy to work out who lived in Mulbarton and who at nearby Kenningham Hall. 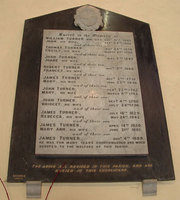 The wealthier line of Turners are associated with Yarmouth, but the farming line was firmly entrenched in Mulbarton and Kenningham. The earliest Directory entry naming Paddock Farm gives James Turner, Yeoman, who is described as farm and landowner in later directories.

They are followed by a son and grandson also called James: James Turner (1805-1850) who married Mary Ann, and their son James (1834-1889) who never married. James Turner jr (and probably his father before him) was a Churchwarden and the equivalent of Treasurer of Mulbarton Church; a Guardian of the Poor; and an officer who kept the records of the Mulbarton & District Oddfellows Benevolent Society (and the Junior branch was named in his memory) - as well as a farmer. Some correspondence preserved in one of his account books shows that he was in touch with an uncle in Yarmouth who owned some of his farmworkers' cottages. 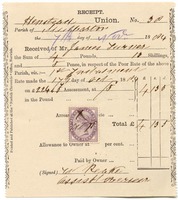 In 1881, the farm had been under restrictions for foot-and-mouth disease, but was declared free by March. In 1884 (above centre). James Turner went to dine with the Rev. Richard G Lucas in November when his annual rent of almost £46 was due, so perhaps he was also farming Church lands (above right). During the winter of 1884-5, James Turner was employing twelve people on the farm - 2 women, 2 boys and 8 men to do work such as washing, carting stones, chopping turnips, trimming hedges and clearing drains (ditches). For a 6-day week, the women and boys were paid between 4 shillings and 5 shillings a week (20 - 25p); the men between 10 shillings and 15 shillings a week (50 - 75p) - slightly more than the workers were paid in 1872.

In the house, Mr Turner employed two or more servants and a housekeeper. According to the Turner family 'pedigree', James Turner was a bachelor, so his housekeeper had an important role managing the house. in 1888, Anne Pratt earned £6 for 6 months - though as a live-in employee all her food, accommodation and work clothing was provided. She can sign her name, of course, which is something the other servants we know of can't do: Ellen Huggins earns £1 - 10shillings (= £1.50p) for 6 months, though food, clothing and accommodation are probably provided as well. Note she is unable to sign her name (below centre). Neither can Mary Larter, who works part-time and probably does not live in - 13 and three-quarter days' work earns her 13/9d = 13 and three-quarter shillings (or a shilling (5p) a day. 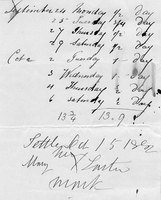 We also know that in 1884-5, Mr. Turner was having his corn ground by Mr. A Thompson at the windmill by the common, and paid £15 for a light carriage licence purchased from Mr. Samuel Gowing at the Post Office. Maybe this was the carriage repaired by H W Howes Carriage Works, Prince of Wales Road, Norwich, in 1987 for 10 shillings (50p) (below, left). He bought his shot and gunpowder, and had guns repaired at a Gunmaker in Rampant Horse Street. 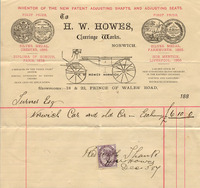 Receipt for part-exchange for a new carriage! 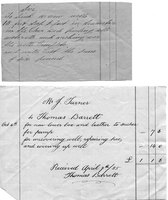 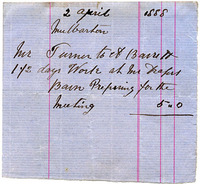 James Turner was very involved with church and village activities. On the Turner monument on the south wall of the church he is described as 'for many years Churchwarden and much devoted to the welfare of this parish'. In 1888 the juvenile branch of the Oddfellows benevolent society was founded and named 'the Loyal "James Turner" Juvenile Lodge' - possibly in his memory as he died the following year.

After James Turner died, the farm seems to have been rented. A 'James Brown, farmer', is listed as living at 'The Paddocks' in 1896, and Robert William Daplyn is listed in Directories from 1904 to 1916. Arthur W Fairman farmed both Malthouse Farm and Paddock farm in the early 1920s. Then his brother Herbert James Fairman (1884-1943) moved from East Carlton Manor Home Farm to Paddock Farm. In fact, when Arthur Fairman married his second wife, Gladys Scales (from Lakenham) in 1925, the reception was at Paddock Farm.

Around 1940, ill-health forced H J Fairman to give up farming and Paddock Farm was let to Mr. Jackson -residents used to call the bend by Catbridge Lane 'Jackson's Corner'! He moved to Carleton Rode around 1957, when the farm came back to a member of the Turner family - Colin Preston.

Colin Preston's grandmother was a member of the Turner family, and he acquired the family farm in the mid-1950s. Like many of his ancestors, Colin Preston became a Churchwarden. It was run as a mixed farm, growing sugar beet and cereals, with cattle fattened for market.

Putting straw on the strawberries at Paddock Farm, probably May 1989.

But he then turned increasingly to food crops, especially strawberries, which were supplied to the Norfolk Show each year. Local women and teenagers were employed to pick the soft fruit, but as labour became scarce (or too expensive) an increasing amount was opened for 'pick your own'. People come from a wide area to pick soft fruit in season, and also apples and onions.

1986 - before barns converted to housing.

Management of the farm passed to Colin's son, Robert, who expanded the business to include a farm shop. It received an 'EDP Farm Shop of the Year' award in 2003-4. Colin Preston also introduced some exotic species to the farm - an enclosure with llamas, pot-bellied pigs and some exotic goats and ducks.

Yet another younger generation is now involved in the farm and shop. The large barns associated with the farm have been sold off and converted into housing. Some of the south-facing land where strawberries once grew is now vineyard and the resulting Humbleyard wine is winning awards.

(Based on information from the Preston family, including a taped interview by Wally Webb with Colin Preston for Radio Norfolk's 'Village Voice' programme on 25th July 1982 and photocopies of records contributed by Bryan Tungate and David Wright)