Mulbarton was one of the many villages up and down the country where a Parish Council was formed for the first time in 1894. This was the year of Gladstone's Local Government Act, which finally took local secular matters out of the hands of the church. Before then, parish matters were dealt with by the Vestry Meeting led by the Rector and churchwardens. Perhaps that explains why the Rector was not elected to the new Parish Council, although he did stand as a candidate!

The first councillors were elected in December 1894. Councillors were - and still are - unpaid volunteers, although a part-time Clerk could be appointed and paid. At its first meeting, held a few days later, in public, in the schoolroom, the Council agreed to meet on the first Monday of every month, and this decision has stood - with very few interruptions - until today.  For more about Mulbarton Parish Council now, go to their website.

Met again on 7th January 1895 - ordered a Parish Council rubber stamp (£1 from Mr. Dye) and agreed to meet on the first Monday of every month at 7 pm.

1949 - New methods of electing councillors introduced and every Parish Council in England & Wales will expire on 20th May 1949 for new elections.

Annual elections meant that parishioners came to the annual meeting to have their say and their vote. But apathy is nothing new - sometimes only one person and the clerk turned up.

Business items in the past were not so very different from today. Problems over road repairs and footpaths were high on the list. An entry in 1911 despairs of getting the problems solved - it could have been written this year! Litter in the pond and on the Common was a regular complaint - then as now. Allotments became a regular agenda item once 'a sub-committee of three practical men' was formed in 1914 - and continue in that way today.

Delving into the Minutes

Old minutes can be fascinating, and extracts can be found any most heading on this website. Hints of wrangles with the Rector; a scandal when a Clerk misused the money; 2000 rats killed in 'Rat Week' 1920....

1907 March 4th Clerk's salary put up to £10 a year plus expenses.
[It remained at this level for almost 50 years, but was supplemented by other official work as 'Overseer', collecting the rates and allotment rents.]

Very rarely do events of national importance impinge on local concerns, except during the two World Wars:

1897 Papers were read as to the Celebration of the record reign of the Queen - was discussed at some length and agreed not to take any notice of the same.

1935 May 6th King's Silver Jubilee discussed. Committee of delegatesfrom Village organisations to arrange celebration. All children under 14 to receive Jubilee medal and tree from Parish rate of 1d. Final cost was £6.5.0d.

1952 Public meeting to be held to decide on Coronation celebrations 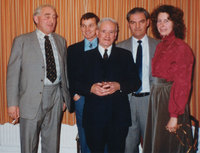 'The Council's responsibilities include the provision and maintenance of three play areas at the Village Hall, one on the Common and another at The Meadows as well as the Skate Park, Mulberry Park and Orchard Park. It provides allotment sites and maintains various green areas situated around the Village, and carries out limited grass cutting on these areas and some verges.... The Council also provides grit bins and doggy bins and pays for their emptying. The maintenance of the clock in the Church tower, which is designated as the village's War Memorial is paid for by the Parish Council, who also support the Church to maintain the local churchyard..... The Councillors are also pro-active in promoting the community's interests, e.g. holding public meetings on important issues, providing a website giving useful information on the village and representing Mulbarton on other forums'
(Quoted from the Council website)

The biggest addition to responsibilities that have been similar for the past century is ownership of the Village Hall and the surrounding land - although management is through a separate Village Hall Management Committee. And, most importantly for local residents, the Council comments on all planning applications in the parish that are put before South Norfolk District Council and its Planning Department.

AND AN IMPORTANT MESSAGE FOR MULBARTON RESIDENTS
'Any parishioner [eligible to vote] can apply to become a Councillor, either by standing for election or by expressing an interest when a vacancy becomes available. More information about being a Parish Councillor can be found on the SNC website or by contacting the Parish Clerk.'