A small building at the south-west corner of Mulbarton Common is considered by many to be an old school. Certainly hundreds of ink-holders were found when the building was renovated by the present owner! It is a tiled building, mainly of clay-lump with some brick - though heavily disguised now. Quite when a school was opened here is unknown. But one former village resident claims his father attended school here: 'I remember my father talking about going to school "at the bottom of the common". This is it! Two of the slogans on the wall were "Soap removes the Dirt" and "Cleanliness comes next to Godliness" he said.'  (from Bill Alborough) 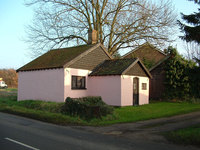 Now smartened up and used for storage, this building is thought to have once been the Mulbarton school.

We know from church records that there were 'dame schools' in the village:

9. Is there a day school, and how supported?    Two dame schools supported by weekly payments of the children

In White's Directory of Norfolk, 1845, Mark Bean Petchell is listed as 'Schoolmaster & Registrar'. Even before then, deeds of the house on the Common now called 'Carpenters' lists a schoolmaster as resident.

An intriguing entry in White's Directory of 1883 states that a house was built on the Rich Charity land in 1829 and used as a school, but was pulled down in 1865 (i.e. when the new school was built) and the land is 'now let as a garden' (probably the current Rich's Trust allotment land).

The supposed old school at the bottom of the common appears to be built on former Common land. It has one large square room with a chimney for a stove, a tiny entry lobby, and at the side is a manger and hitching rail for a horse. In the early years of the twentieth century it belonged to John Henry Steward Esq., who as Lord of the Manor was owner of the Common. In 1915 it was let to the wheelwright at the Tradesman's Arms opposite for use as a paint shop where carriages and carts could be decorated.

The building was part of the of the great sale of the East Carleton Manor Estate in 1920, and the description here is the only documentary evidence that it was a school:

LOT 21: The Old Mulbarton School (now used as a Paint Shop), situated at the junction of the roads from Mulbarton and Bracon Ash, and being a weather-board and tiled building with flagged floor. Lean-to Cart Shed attached. The estimated area is 4 poles .... Let to Mr. F Swain on a yearly tenancy at £3 pa.

It seems that Mr Swain, wheelwright and publican, bought the freehold and continued to use it for his business.

In the early 1860s, the Rector of Mulbarton negotiated with the Lord of the Manor to enclose some Common land on the east side of the Common to build a more modern school. 'Specifications of Sundry Artificer's Work required to be done in the Erection of a Village School at Mulbarton for the Rev. R.G. Lucas' were drawn up by the architect R.M. Phipson of Surrey Street, Norwich in March 1864. The plans can be seen in the Norfolk Record Office (PD494/21).

The National School (the 'old school' - now the dental surgery) was opened in 1865. It was a very simple design - one large room and no School House. This proved to be a deterrant to getting and keeping Head Teachers - they had to find their own accommodation (one is recorded as living with the local 'rat-catcher'!) and travel to work, and they had to teach all ages in one room. In 1876, a 2nd small classroom was added at the back for the Infants and a porch at the front to 'improve' this Victorian school  (NRO plans PD494/22 & 23). It was not until 1900-01 that a School House was built for Mr & Mrs Simmonds. Use these links for information from the school log-book.

In 1903 the name was Mulbarton Non-Provided School and children were being admitted as early as 3 years of age. They could leave on obtaining their labour certificate at age 14 (or earlier during World War 1). The school was in two sections: the Mixed School (Junior and Senior) and the Infants. Although supported by the church, a school fee was still required from the parents and often children were sent home for their schoolpence, and sometimes did not return. Even in the 1920's and 30's the school was being helped by voluntary contributions. We are now into the era people remember - the 20th Century School.

BIG change came to the administration of Mulbarton School in the 1940s - as a direct result of the 1944 Education Act. The school managers asked Norfolk County Council Education Authority to take over the school, but they were not keen to do so and it continued as a Controlled Church School. 1946 brought matters to a head because the managers, having no funds at their disposal to meet expenses, asked the authority to take over forthwith, and in January 1947 the school passed entirely out of the Church's control and became known as Mulbarton County Primary School.

When the 1944 Education Act was implemented, Secondary Modern and County Grammar Schools were set up for pupils from 11+. The school leaving age was raised to 15 from 1947. As early as 1948 children of 14 were going on to Wymondham Secondary Modern, and gradually all those of Senior age were found places at Wymondham. 1953 saw the end of the all-age school. The premises were improved - even a new toilet block was added! - and mobile classrooms meant children could be taught in their own age-group.

The 'old school' toilet block whilst it was being converted into a pharmacy!

The next significant change was the building of a new First and Middle School in 1969 near Mulbarton Hall. The Infants were the first to move into these new buildings on February 18th 1970, followed by the older children from the Primary School in 1973. For a short while children were then being admitted from Swardeston and Tacolneston from the age of 8+. The school, which was being administered under one headteacher, became two schools and opened as Mulbarton First School and Mulbarton Middle School in September 1977 under separate Head teachers Head Teachers. Now children moved from Wreningham and Tacolneston First Schools (formally Primary Schools) to the new Middle School.

Finally the story came full circle - from September 2017, the two schools were once again amalgamated into Mulbarton Primary School.

(Some information from programme of the Official opening of Mulbarton Middle School by the Chairman of Norfolk Education Committee, Mr. Michael Chaplin, on Wed. 15th March, 1978. The Headmaster then was Mr. Derek Chamberlain. Other information from school log books.)