This 'Virtual Tour' begins and ends at the World's End car park. It takes you around the Common (in a clockwise direction) with stops at most of Mulbarton's historic features. Optional additions are to walk (or drive) towards Norwich on the B1113 to Paddock Farm (with car park for farm shop) and along Rectory Lane to glimpse the Old Rectory, Mulbarton Lodge and Lodge Farm. Of course, you can start at any point and continue round the circle - just follow the numbers....

The numbers refer to the map (above). Each stop features photos. Click on a word underlined in brown to take you to the page on this site with a lot more information. You can then return to the 'Virtual Tour' and continue on your way.

DANGER: Mulbarton's roads are not as quiet as they once were (especially the old Turnpike, or B1113) so please take GREAT CARE when crossing roads, although most of the historic sites can be viewed from the Common....

[1] The World's End is an historic inn that has been much altered - as you can see by comparing this early 20th century photo with the building you can see today. The former stables (right) are now the car park.

From the front of the World's End look across the road - Butler House was once one of several shops  in Mulbarton (the bow window is a give-away) and to the right, at the back (behind the fence), is the old bakery. There was once a hardware shop a short way further north on Norwich Road. As you look north, compare the view today with this picture - probably taken at the same time as the photo of the World's End, above. The hedge and bank (outside Tabor House) and the terrace of brick cottages are still there! The open gate leads to the hardware shop.

[If you wish to see Paddock Farm, stay on the same side of the road as the World's End, walk north (left) to reach the farm shop]

From the World's End, cross the road with care. Now walk south towards the village pond. On the corner is another former shop - once a bakery. The front room of the adjoining cottage was once used as the doctor's surgery.  The view across the pond [2] has not changed much in 120 years!

Make your way to the seat and look around - the opposite (west) side of the road has changed rather more! Look back towards the World's End:

The former Post Office, shop and telephone exchange (far let) is still there, though now a private house. A children's nursery and flats occupy the site of Frost's Garage. The modern house beyond that is on the site of the Wingfield Hall - the village hall, parish rooms and reading room until about 1970. Beyond that the former Primitive Methodist Chapel is still recognisable, but has been converted into two small dwellings.

The former Post Office is still recognisable, but dominating the old view was the windmill, now long demolished, although the Mill House is still there. You will pass it later. Notice the slope down to the pond - used by the cattle who grazed the Common until the early 1950s.

Now cross the road carefully to [3] the village sign.

As you look towards the church, pause to notice the entrance to the (new) Rectory. A row of thatched cottages once stood here as homes for the poor of the parish.

Cross over to [4] Mulbarton church where you can take your own 'virtual tour of the church and churchyard here.

A short way south of the church is the magnificent tithe barn (above) that was once part of Mulbarton Manor. Walk a short way along the track past the end of the barn and into the car park of Harvest House (the church's rooms). From here you can see [5] Mulbarton Old Hall or Manor House with a gable end that matches the old barn.

Continue south alongside the Common. Soon you will pass the entry to the newest Village Hall  complex, which includes the Mulberry Park football field, many other recreation facilities and the Scout & Guide HQ.

In front of the Village Hall is the former School House, built in 1902 to accommodate the Head Teacher. And just beyond is [6] the former Village School - now a dental surgery and chemist shop and before that the Village Hall after the school had moved.

This view from the Common shows the old school with its flagpole (left) - no need for a fence because traffic was a rarity! The building was enlarged at different times, and one extension is now the chemist shop which looks unremarkable, but it holds quite a story!

In this old photo, one small building seems to be further forward - this wooden hut was the old butcher's shop. It was replaced by a brick building that still exists - but as offices. Behind the shop was an abattoir where pigs were butchered!

In the distance is Mulbarton Hall with its magnificent cedar trees: continue to Hall Corner. Despite some infill with modern houses, this view of the cottages on the left is still recognisable - they were built for the butcher's workers.

Prominent at this corner of the Common is [7] Mulbarton Hall.  The original Queen Anne building has been extended on either side and its land once extended between Long Lane and Birchfield Lane, as far as the southern boundary of Birchfield Gardens.

It was a private home until acquired by Norwich Council as an old people's home, when much of the land was sold off for housing and for the site of a new school. Today it is once again a private home.

[If you wish to find the Old Rectory, return to Hall Corner, cross Long Lane and ahead is Rectory Lane. The Old Rectory is on your left, just past Old Rectory Close (built in the Rectory orchard). Much further along Rectory Lane you can glimpse Mulbarton Lodge and Lodge Farm: interesting houses but rather hidden behind high walls. Then return to Mulbarton Hall to continue the walk.]

Looking back towards Mulbarton Hall (in distance) in 1920s

Now walk along the south side of the Common, past the Surgery and Primary School - both built on land that once had stables and other outbuildings for Mulbarton Hall (above). Continue to the bottom corner of the Common where there is a fascinating group of historic buildings - and memories of some that have disappeared. [8] Compare this view as you look ahead:

Apart from the state of the road (!) several buildings remain. The low white building on the right is Malthouse Farm and adjoining it is the old Malthouse which had been converted into a house by the time this photograph was taken (around 1900). When a malthouse, it was run by the miller up the road. The buildings often had separate tenants - in fact it was the present owners who finally had the two separate electricity supplies incorporated into one this century!

The low building on the left looks a lot smarter now. It is thought to be the original village school, but at the time this picture was taken it was the wheelwritght's workshop. Behind it, and across the main road, is a 3-storey building that was pulled down about 1970. The wheelwright lived here and ran it as a beer tavern, too. The Tradesman's Arms was a well-known feature of Mulbarton until it closed in the late 1960s.

Today there is a road of modern bungalows in the foreground of this photo. The name 'Forge Orchards' is a clue to another workshop that once existed here - conveniently next-door to the wheelwright's workshop. Technically, the smithy was over the border in Bracon Ash, but it was always regarded as part of Mulbarton. There are some remnants visible - but to see them you will have to cross the B1113 at a rather blind corner: BE VERY CAREFUL!! 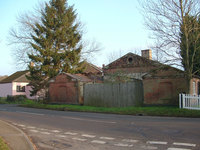 Cross to the pavement opposite and walk down to the junction with the road to East Carleton [9]. Look opposite, and behind a rough fence are the remains of the former blacksmith's shop. Next door is the attractive thatched Forge Cottage - somewhat of a contrast. The main road south crosses a stream at Mulbarton bridge and from here there was once a good view of the Tradesman's Arms and the cottages on the corner of East Carleton Road - all replaced by modern houses.

Return to the Common opposite Forge Orchards and walk on a safe route north, back towards the Village Sign. But there are a number of items of note on the way.

First the Common itself [10}. A rare species was once found in the pond near where you join the Common. The deep pits you pass are now full of trees, but were favourite slopes for sledging right into the 1980s. Tales of sad events when the snow was even deeper are in the section about The Common. The football pitch is still well-used - and Mulbarton has spawned several footballing heroes, and there was once a cycle trackway here, too.

Look across the main road at the houses west of the Common [11]. Most prominent - because it is nearer the road than the others is 'Carpenters', appropriately named as the house deeds show it was occupied by a long line of carpenters.

In the past, the view from a walk north up the Common would have been dominated by the windmill. As you approach the village sign, look across the main road to the Mill House [12].

Today both the mill and the chimney of the emergency steam supply have gone, but the fine Mill House remains.

Cross the road WITH CARE and return to the World's End, with its car park and welcome refreshment!