The Strange Tale of the Chemist Shop

The first battle was over permission for an independent pharmacy to replace the dispensary in the surgery. South Norfolk MP John MacGregor backed the protest in 1991, when both he and other government ministers - including the Prime Minister, John Major, were sent letters of protest and a petition (above).

Despite local opposition, work went ahead to build a shop next to what had become the dental surgery, but the owner was forced to stop work in May 1993 after protests from a newly formed Mulbarton Common Protection Group who had discovered that the shop was being built on common land. (above)

But that was not the end of the Chemist Shop saga. Permission for a pharmacy still stood - and a tiny dispensing chemist was opened in what had once been the school toilets! There was limited stock - and no room for a queue (below). 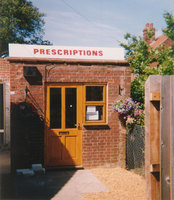 The old school toilet adapted for a new Chemist shop!

Eventually, the financial adviser moved to other premises, and the office became a chemist shop, with a range of health and beauty items as well as a pharmacy. And there is plenty of space for parking - on what continues to be classified as common land!