....in most houses were basic. Speaking of Hall Cottages in Long Lane, George Skipper remembered: 'There was no electricity in the house until 1946. Drinking water came from the well (also used to keep butter fresh in the summer). At the corner of the house was a large galvanised water tank to catch the rainwater, which we used for washing. There was an old sock on the drainpipe to filter the rainwater. There were two toilets that were set about six feet from the hall fence. These were brick built with a sloping roof and a bucket under the seat that was emptied at a point in the garden that Dad kept for that purpose.' 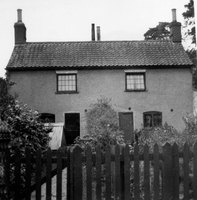 Water came from pumps until well into the 20th century. Although the only pump that still exists (but no longer works) served the cottages around the pond, the sites of other pumps can still be located in Birchfield Lane and Cuckoofield Lane if you know where to look! The location of pumps and wells - and the right to share them - are mentioned in title deeds.

Brenda Ford (nee Collins) remembered: 'I had friends who lived in the council houses at Mulbarton. In those days they got their water from a pump halfway along the road. It seems ridiculous now, but they had to carry all the water they used in buckets from this pump to their houses. We were little better off as we lived in a tied cottage, but we did have a tap - sort of swings and roundabouts!'

The private houses built on the new estates as the village grew all had running water, hot & cold taps, and inside flush toilets and bathrooms. Soon the Council houses and cottages would catch up!

1955, July 5th '..a letter from RDC in reference to Night Soil Collection in the parish which stated the District Council hope to make a complete review of the service in the near future when the Parish Council's request would receive consideration.'

1957 March 14th '...a letter from RDC stating that the collection of night soil in the parish had started in reference to the Parish Council's request.'

[Older residents recall that the Nightsoil collectors came to St. Omer Close on the same evening as the fish-and-chip van. 'The men would remove their big rubber gloves and eat their supper in the cab.'!]

1965 May 5th Special Parish Meeting
'Over 100 were admitted to the Schoolroom. [RDC refused to allow any officers to attend and referred to letters to residents of Lakes Ave.]
'It appeared....that very few people had had their cesspools emptied regularly. That the 10/- emptying charge was further subsidized from rates by 17/6. That the RDCs Consulting engineers were actively engaged in preparing the main sewerage scheme.
One resident claimed that land drains had been linked to cesspools and consequently cesspools were always full and seepage was coming up in gardens and lawns which constituted a Public Health menace. There was much concern at the likelihood of an epidemic.
One man had his cesspool emptied in the morning and although the system was not used during the day it was full up in the evening.
It was unanimously expressed that 10/- per load of rainwater was too expensive
It was suggested that until the main sewer arrived a free weekly emptying service be asked for.
[Mr. Gowing (Chairman) to take these matters to next P. Health meeting of the RDC and report back]

1967 Oct. 23rd Parish Meeting in the Wingfield Hall
Mr. Gowing reported that the Sewerage scheme had advanced to the stage of tenders being sent out.

Bill Alborough, commenting on the Council houses, said: 'In the mid-1970s extensions were built to provide a separate kitchen and bathroom, and, to prove that civilisation really had arrived, an inside flush lavatory was fitted!'

Mains electricity arrived in Mulbarton about 1930. The Malthouse (then Malthouse Farm and Thorpe House) was connected in 1931. Before then, Mulbarton Hall was one of the few - maybe the only - house to have electric light, supplied from its own private generators.

Towards the end of 1931, the Men's Club wrote to the Trustees of the Parish Hall (Wingfield Hall) 'with regard to equipping the Room with electric light'. The estimate for installation was '£8.13.0d, [£8.65p] with extras for special billiards lights.' The trustees agreed to pay £4 and the Men's Committee the balance. By December they had agreed to have a locked fuse box and 'four 60 watt bulbs be purchased with a view to economy'.

Despite distance from the road and the expense, the church was connected a few years later, as a news report of the Harvest Thanksgiving service, 1934 indicates:

"Electric light is now installed at Mulbarton Church and was used at the evening service for the first time." Rev. C. B. P. Ramsay Rector and Rural Dean.

1938 - Nov. 25th The electric has been installed in the school by the Managers.

Commenting on a cottage next to the Church which was thatched... "I had piano lessons with Flo [Utting]. They did not have electricity at that time, so when it got dark Flo would light the hurricane-lamps at either side of the piano to enable pupils to see for the lesson."

'Oh the bliss of not shovelling coal! But there was no more ash to scatter on icy roads....'

But the School had to wait yet longer:

Not all houses had electricity, even by the War years, but maybe the church thought it not worth connecting the condemned church cottages:

Gas first arrived in the village in 1973 when a 4-inch main was laid to serve the two new estates. It was more than ten years before houses on the older estates were able to get a supply.

1896 Oct. 5th Clerk to write to neighbouring parishes... about fire engine apparatus. Resolution that Parish and district needs a fire engine proposed and carried.
[But the response was rather negative: Newton Flotman Parish Council minuted in December 1896: 'The clerk was instructed to write to the chairman of the Mulbarton parish council that this council could not enter into any proposal as to a fire engine at present.']

1897 Jan 18th Special Parish Meeting with 'a good attendance' to discuss fire engine. No money to come from Poor Rate - voluntary subscription suggested. Norwich would not send one of their engines. After much argument, meeting voted to have a fire engine which they wanted paid from the Poor Rate.

New Council elected in 1899. At meeting on June 1st, the idea of providing a fire engine 'abandoned'. Still felt the same in 1900, when they rejected a proposal coming from Thorpe St. Andrew for rural fire engines.

1902, March 19th A scheme proposed by Norwich considered but too costly, so another scheme abandoned. 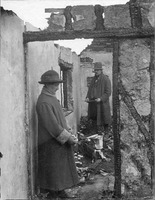 Could it have been saved? Mr & Mrs Carver survey the ruin of their home on Norwich Road. A spark from a traction engine set the thatch alight.

Neighbouring East Carleton already had a service and collected subscriptions per household to meet the quota of £5.10 shillings paid each year in December to the Norwich Fire Brigade. 'The property owners, quite rightly bear the bulk of the expense, the farmers next and the cottage residents next in respect to their furniture.' (From The East Carleton Magazine, December 1917) The same magazine has a note in the January 1924 edition: 'On two occasions since we have become subscribers, the Brigade has been down to fires in this parish.'

1937 - Fire Brigade now a matter for the RDC instead of the Parish. 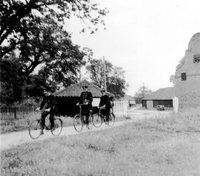 At the beginning of World War 2, Mulbarton, like many other villages, was given fire-fighting equipment to deal with incendiary bombs, etc. Auxiliary Firemen were recruited and trained, including Mr Skipper (at centre in photo above) and 'Crom' Blackburn as drivers, Percy & Reggie Wymer (probably in above photo) and others. The first fire engine, a hand operated pump on a handcart, was housed at Mulbarton Hall. This was taken to, but not used, when an anti-aircraft shell broke a cable on the meadow opposite Mr Woolmer's house in Rectory Lane. Norman Williams was there to say "that's not a fire": the cable was arcing on the ground, lighting up the whole area while German planes were overhead!

Later, this pump was replaced by a Coventry Climax Minor Trailer Pump with a Buick converted vehicle to pull it. The Minor trailer pump was later replaced by the Major version that gave double the water output. These were too big to be stored at Mulbarton Hall, so a home was found in one of the outbuildings of the Old Hall. The practices were still done at Mulbarton Hall using the big pond (near where the surgery now stands) as a water source. George Skipper (who kindly supplied the above photo of his father) says, "I was there on Sunday mornings to watch the hose drill and hanging the wet hoses up the big chestnut tree near the pond to dry". The tree is still there, by the Infant School entrance!

"Fortunately we had no fires in Mulbarton, though the firemen sprang to action when the Fish and Chip van in Wood Lane, Swardeston, caught fire!" Mr Skipper also notes that "While this appliance was officially allocated to Mulbarton, it was frequently "borrowed" by the full time NFS for various work including pumping-out damaged shipping. It would come back saturated with salt."

It still existed long after the war - some people dragged it out and tried it out around 1960, and it still worked, but water went everywhere except out of the hosepipe!