The North End of Mulbarton

North along the Turnpike & 'The Factory'

The north end of Mulbarton, north of Paddock Farm, has seen a number of changes. Until the late '50s, much of the land on both sides of the main road was used for market gardening. There is still some allotment land known as 'The Swamp' (although it is at the top of a hill!) A few old cottages have been replaced by modern houses, a bungalow, the telephone exchange and what is now the veterinary surgery. Before that it was the doctor's surgery, and is on the site of the 'Factory Houses' (see below). Several old cottages remain - including Orchard House, the thatched Hill House and the Old Mill House on the parish boundary with Swardeston. 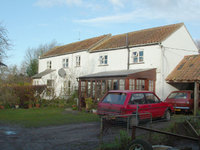 Old Mill House: the back wall of the house is on the Mulbarton/Swardeston boundary

Memories of the North end of Mulbarton

The late Mrs.Nesda Gray, nee Carver, wrote in 1988:
My mother was born in Orchard House in 1887 and I was born here in 1914 and my sister in 1921. In 1926, a thrashing engine (traction engine) coaling up to climb the hill set the thatched roof on fire with sparks (below). It was rebuilt [with a tiled roof], and my father, Frank Carver, carried on as Market Gardener and Florist. He also had 7 acres of fruit trees, so he was well-known in the 'Early Market'.

100 yards from here is the Veterinary Surgery - it had been the doctor's surgery until the new one opened near the new school. On that same ground when I was a girl there was a long building known as 'The Factory' or Scotts Terrace. This was five houses, but I was told it had been a candle factory [it was a SILK factory - ed].
There must have been about 10 children at a time go to school from them houses. Often on the way home we would have spinning tops or play marbles. No fear of motors, or a busy road like today.
I know two sisters who moved out of one of the 'Factory houses' 50 years ago to live in St. Omer Close - built by the Council on an orchard.
(Extract from memories of the late Mrs.Nesda Gray, nee Carver, written in 1988 for Radio Norfolk interview)

Tackling the blaze at Hill House, 2005

Thatch fires continue to be a hazard - Hill House caught fire through electrical problems in 2005 and had to be rebuilt and rethatched (see heading).

Other features of the 'North End' included a pond and a tree:

'Stinky Pit - now a small pond on the corner of Norwich Road and Catbridge Lane. This is where the effluent from the cowsheds at Paddock farm used to collect - and it was foul!'
(Bill Alborough)

Complaints reached the Parish Council:
1934 Jan.23rd Complaints were received about the smell arising from the pit at the top of Catbridge Lane....the Clerk to write to the Sanitary Inspector and ask for the pit to be cleaned out.

And there was a prominent Ash tree - just west (village side) of Scotts Terrace.: 'If someone said "There's been an accident near the ash tree", everyone knew where they meant.'

The 1:2500 (25 inches to 1 mile) Ordnance Survey 'County Series' map of 1881 shows buildings in pink - with Paddock Farm prominent on left. Just north of that is the offending pond. And further along the road towards Swardeston and Norwich 'Scotts Terrace' is clearly markd.

Scott's Terrace - or the Factory Houses

The name 'Scott's Terrace' appears in the Poor Rate book for 1875-6 (nos.71-2 and 84-6). It was owned by Charles Abednego Betts and in Aug. 1876 only two of the five cottages were inhabited - by William Beaumont and Charles Baxter. In the previous year, two other cottages were rented by Edward Buxton (who moved to 'by Common') and George Dawson. The rateable value was £4 and the residents received a 15% rate reduction.

Bill Alborough was born in 'the Factory Houses' and remembers it well:
Scott's Terrace [was] a row of five three-storey houses on the site of what is now the vet's. They existed in 1851, when my grandfather lived at No.1. They were also known as 'The Factory'.
60 or 70 years ago, if you told any Mulbarton local that you lived, or had lived, in 'The Factory', they would have understood. Now, memories of The Factory are fading. It stood where the Veterinary Surgeon's building is now, on the Norwich Road. Why The Factory"? Mrs Preston of Paddock Farm, told my mother it was once a silk factory (see below). I don't know when it ceased to be a factory and became a terraced block of 5 three-storey houses to be known as Scotts Terrace. It was only as Scotts Terrace that I remember it. However, I did find out in the 1851 Census that my great-grandfather lived at 1 Scotts Terrace aged 18. The head of the household was his mother, aged 46, described in the Census returns as a Pauper. I don't think this had the slightest connection with the fact that my mother and father came to live there. I don't know when they moved in but it will have been in the late 1920s. My father, badly wounded in the First World War and in receipt of a Disability Pension, still managed to hold down a job on a farm. This involved the tied cottage system whereby if you lost your job you lost your house. My parents had already been the victims of this. Not because of anything my father did, but because his boss went bankrupt. They were anxious to escape the system and when they heard that 3 Scotts Terrace was vacant and it was owned by Arthur King, the butcher at Swardeston (where the pet shop is now), my mother went to see Arthur and asked if they could have the house. Amazingly, Arthur didn't even know he owned the house, but his reply was "If it's mine, Alice, it's yours", a phrase that my mother repeated often and remembered to her dying day.

I was born there in 1931 and I was 5 when we left. There was no drainage. Water came from a pump or from the roof. Waste water was thrown in the ditch at the bottom of the yard. This had a smell all of its own. (Sometimes, even now, on our cycle trips through French villages whose waste water flows down the side of the road, the memories of that smell come flooding back!) There was a tumbledown shed and a bucket lavatory, the contents of which had to be carried to and buried on the allotment ('the Swamp'). There was always the threat of flooding as the water swept down off the fields behind in heavy rain.
In 1936 St Omer Close was completed and all five families from "The Factory" were rehoused there. I think they were the Hemnall, Tuddenham, Alborough (mine), Andrews and Wharton families from 1 to 5 in that order. The vacant building stood in a dilapidated condition until after World War 2 and we local children used it as an adventure playground and Donny Abendroth kept his rabbits in there. Most of my memories of the building came from those days. How we didn't have more accidents I don't know as many floorboards were missing or unsafe. I remember the narrowness of the steps on the staircases, especially on the bends! The building was demolished after the war. The site was firstly the doctor's surgery and is now the vet's.

Another former resident of the 'Factory Houses' remembers that each house had a back door of the stable-door type. Like others, his family was rehoused in St. Omer Close.

Evelyn Smith can also remember playing in the derelict 'factory houses' during the war. It seems they were knocked down in 1946.

'The Factory Houses' are referred to in the Parish Council Minutes:
1915 Dec. 13th 'Factory Cottages' had flooded - partly because the tenants had left rubbish in the drains.

In fact just over 3 years earlier the Factory Houses were badly flooded in the 'great storm' of August 1912 when nearby Hethersett recorded 7.33 inches of rain in the 48 hours up to 9am on Tues 27th August. 'The inmates were driven into their bedrooms with the exception of Mr & Mrs Stebbings with their seven children who had to abandon their home entirely and were given shelter in the Wingfield Hall for the night.' (Quoted in 'Norfolk Floods' by Neil Storey, Halsgrove, 2012)

They are also frequently mentioned in the School log book - mainly for outbreaks of disease or non-payment of the 'school penny'. People there were poor and conditions were tough.

The Andrews family from Scotts Terrace pose on 'The Swamp'

Gordon Andrews behind his home in Scotts Terrace

A car on Norwich Road, parked beside the fence of ‘The Factory’ (right)

Was Scott's Terrace really a Factory?

It was a study of the Turnpike map of 1832 that gave the answer: the Turnpike Trust wanted to take out some of the bends in what is now the B1113 [if only....!!] and there by the big bend before Paddock Farm is marked 'the Late Manufactury'. Further investigation showed that it had been a SILK factory, which had come up for auction in 1830:

To be sold by Auction by William Butcher on Tuesday 9th March 1830 at the White Lion Inn, White Lion Street, at 4 o'clock in the afternoon, pursuant to an order of the major part of the Commissioners acting under a Commission of Bankrupt against Arthur Beloe, the following valuable estates.
[Lot 1 was a house and cloth factory in St John's, Timberhill, Norwich]

Lot 2 - A substantial newly-erected Building at Mulbarton, in Norfolk, lately used by the said Arthur Below (sic) as a Silk Factory, with a piece of ground at the back thereof. Apportioned land tax 4 shillings per annum.

Lot 4 - A double cottage at Mulbarton, in Norfolk, partly occupied by John Hilling, with a large garden adjoining.

For further particulars and conditions of sale apply to Messrs Sewell, Blake, Keith & Black, solicitors, Norwich, or to William Butcher the Auctioneer.

The silk industry in and around Norwich was experiencing problems in the latter part of the 1820s - and premises outside the city were thought to be taking jobs away. Another report in the Norwich Mercury (12th June 1827) tells of a party of Wymondham weavers accused of damaging looms and destroying £1000-worth of silk at Ashwellthorpe. They were arrested and taken to Norwich Castle in hackney coaches with an escort from the 12th Lancers (no doubt passing along the Turnpike and through Mulbarton). Their arrival sparked a riot by Norwich weavers who were charged with riotous assembly. Their defence claimed that the Riot Act had been mis-read, so their punishment was mitigated to being bound over at £50 each.

Mulbarton's 'Manufactury' would never have been a factory in the modern sense, but accommodation for weavers with a top-floor room for the looms. It was not wanted as a factory, so whoever bought it turned it into a terrace of 5 cottages on 3 floors by dividing the top floor into attic rooms for each house. Those who lived there 100 years later remembered that the ground and 1st floor had brick walls between the cottages, but on the top floor the walls were flimsy and you could tap messages or shout to your neighbour!

Lot 3, the 'good brick cottage' in the auction probably became 'Orchard House' where the Carvers eventually lived (see above). And Lot 4, 'a double cottage' became farm workers' cottages until they were replaced by a pair of post-war houses still called Hall Farm Cottages.

Unfortunately no photos exist of 'The Factory', but there is the remains of one wall between the vet's car park and paddock!