ON THIS PAGE is information on the Tradesman's Arms; memories; some organisations that met there; and a list of Landlords.

The 'other' Mulbarton pub was situated next to the Malthouse, almost on the corner of Norwich Road (B1113) and East Carleton Road - a site now occupied by modern houses. For most of its existence it is described as a 'beer house' and did not have a full licence. The proprietor was a 'beer retailer' who did other work as well. For most of its existence it was in the hands of wheelwrights - it was very conveniently placed, opposite the forge where the blacksmith would put the iron tyres on the wheels. In the 1891 census, Charlotte Dye a widow, is listed as wheelwright, carpenter and innkeeper, living with 2 sons and 2 daughters; one son is a wheelwright and carpenter and the other is a butcher's assistant. Much later, another innkeeper, Mr. Swain, was also one of the village undertakers. In 1950, a wine licence was applied for.

The Tradesman's Arms was at the southern end of a terrace of brick houses - the central one being the landlord's accommodation and the most northerly rented out as a cottage, where the Tungate family lived for many years. At the back it extended further with a 'smoking room' overlooking the bowling green (below). Now it has gone, people remember the pub with considerable affection:

'The old Tradesman's Arms was owned by Bullard's Beers of Norwich, and was managed by Frank Swain and his wife Blanche. An 8-foot wall separated the pub from Malthouse Farm. Some cottages adjoined the pub - one small room was a shop belonging to Mr. Harbor, who did boot and shoe repairs, etc. Barny Randall also live there - a bit of a barber in those days. And we lived in another of the cottages that joined on to the pub.'         (Dorothy Tungate)

'Opposite the blacksmith's stood the Tradesman's Arms, a real "spit and sawdust" pub. The landlord, Frank Swain, later gave way to Stanley Morris and his wife [Frank Swain's daughter]. This was the workers' pub. Sunday lunchtime, those that worked with livestock dropped in for a pint or three and the humidity rose as did the good agricultural smells. Jack Howard from Lodge Farm would engage in a wind-up with Jimmy Mackerell from Kenningham Hall Farm about straight furrows and 'ringes' (rows of crops). Charlie Elvin would be busy boasting how his case tractor ploughed straighter and deeper than the other two's hosses.'   (Tony Kent)

'A nice little old pub where people used to gather to play cards and dominoes.'
(Bob Jackson in tape-recorded interview)

Mrs. Rosemary Wright (nee Morris) was born in one of the cottages facing the Common, and later moved to the Tradesman's Arms when her parents became landlords. Her bedroom on the first floor was 'as big as a ballroom - and freezing cold in winter'. She remembers the bowling green which her mother cut with a hand mower almost every day - it was said to be the best green in the Bullard's league.

The pub had no cellar - barrels were kept in a cool place below the bar. On hot days, wet towels were wrapped round the barrels to keep the beer cool. Water came from a pump fitted over the well out the back. In the bitterly cold winter of 1947, the family had to boil kettles and pour the hot water over the pump to unfreeze it to get more water!  (Oral communication from Mrs. Rosemary Wright) 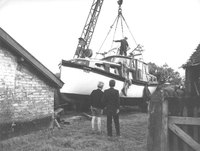 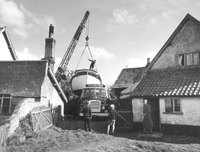 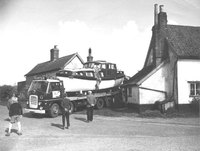 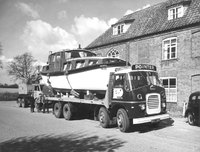 A number of people remember the boat at the back of the Tradesman's Arms. It was quite a day when it was moved by giant crane and taken to the water! (above). This was no ordinary boat - during the years of acute housing shortage after World War 2 it was the first home of Mr & Mrs Wright, the Landlord's daughter and her husband. Then it was taken by road to be launched in the River Yare near Norwich for more appropriate use as a Broads cruiser. (Photos & information from Mrs Rosemary Wright)

The Tradesman's Arms Bowls Teams and the Darts Teams competed against other clubs and seemed to be locally well-known. For the members, trips away to play other teams were welcome outings. Below is a photo of a rather battered inscribed Darts Cup that survived.

My dad... liked his glass, and every evening, regular as clockwork, he'd go with his cronies down to the pub. They allus sat on the same bench, back to the window; my old dad in the middle a-sucking his pipe, one fellow on his left a-pulling of his moustache, and the other allus stuck his legs right out and rested his head on the window sill. Blow me if they didn't allus look the same way. My dad would order a pint, and the tankard would be passed from one to the other till it was finished. That happened every night - far as I can remember.

(Extract from 'Within Living Memory - a collection of Norfolk Reminiscences' (written and compiled by members of the Norfolk Federation of WIs, 1971) All anonymous)

The Tradesman's Arms closed on 27th January 1969. It stood vacant for a while (above), and then the whole site - pub, green, former houses and workshops - was sold to a builder from Surlingham. Everything was demolished very quickly when there was the possibility of a Preservation Order being applied for. The road was widened and new houses built on the site. For a long time it was the name of the bus stop - a name guaranteed to sort out the locals from the rest! All that remains now are a few tiles and the wrought-iron arm that once held the pub sign - at the antiques store in the old forge opposite (below). 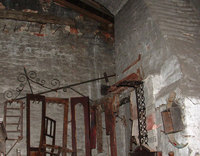 Alehouse with beer licence. - Wine Licence applied for in 1950

in 1937 Frank & Blanche Swain - Frank was also a wheelwright

Blanche Harriet Swain (nee Carver) was the daughter of Harry Carver, licensee of World's End from 1907. According to her niece, Blanche Swain 'kept the Tradesman's Arms for over 30 years'. Frank Swain died 10th Nov. 1946, but Mrs. Swain continued to run the pub.