Between the wars, fur was fashionable. Myocaster coypus is a large South American rodent (up to a metre long from nose to tail and weighing about 20 lb / 9kg) with small eyes, large orange front teeth, whiskers, a long tail and webbed teeth. Its outer coat of long, coarse reddish- or yellow-brown hair is unattractive, but it hides a velvety slate-grey under-fur known as nutria (Spanish for 'otter'). This is soft and very attractive to the fur trade: pelts from 22 animals made 1 fur coat.

The coypu was first introduced to Britain in 1929, and fur farms were set up in Norfolk and elsewhere.  Philip Tindal-Carill-Worsley (1881-1946) was living at East Carleton Manor and saw an opportunity to make a profit from some very wet land along the stream that formed the border with Mulbarton parish - the stream that originates behind what is now Catmere Herne; borders 'The Meadows'; passes under the B1113 at Mulbarton Bridge and flows through the  lake of The Grove (Cheshire DisAbility); now goes under Catbridge Lane (see photo); crosses Intwood ford and continues on to join the River Yare near Keswick Mill. The river and an adjacent area north of Catbridge Lane was fenced off and pens built for the animals. Gamekeeper Charles Edgar George Schofield was put in charge - and by 1938 there were 300 animals. The coypu pelts, or nutria fur, were sorted at East Carleton and sent off to the London market. 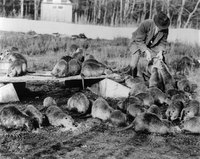 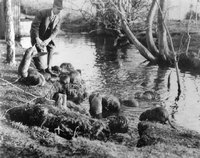 Coypu by the stream between Mulbarton & East Carleton 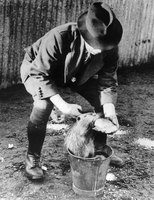 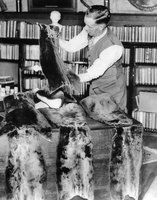 Great care was taken of these animals because of their value, but inevitably a few of these strong-teethed rodents managed to escape. In 1937, some got into the Yare and then into the Broads, where they were very much at home - home being large burrows that devastated the river banks. By 1940 all the fur farms had closed.

John Betts of Bracon Ash remembers coming home from school in Norwich one winter evening, and in the dusk he saw what seems a huge animal with ferocious teeth in Hawkes Lane, Bracon Ash.... He turned tail and ran the long way home!

These non-native rodents caused havoc with the banks, the reedbeds and the fish stocks of the Broads. But whilst some people saw them as a menace, others thought them harmless vegetarians.... As coypu became widespread and more of a menace, the government started a trapping scheme around 1960 - using carrots as bait. Attractive ransoms were offered for any animals shot or caged. Britain was declared coypu-free in January 1989, when none had been spotted for 21 months. The last survivors - two elderly males, had been killed by cars!

For a number of years, Mr Preston kept a Llama, a Vietnamese pot-bellied pig, a pygmy goat, and some exotic ducks opposite the Farm Shop of Paddock Farm. They were quite an attraction to young visitors.

Today, we still have some exotic farm animals in Mulbarton - on land once owned by Malthouse Farm....